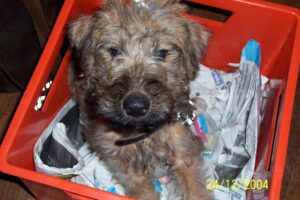 They’ve made the call to the vet, and they’re keeping the fringes of their hearts together. They want to, have to keep it together until their dog’s final day. Even if they know that this is how life progresses, that final step is never directly in front of anyone.

The parents would rather think back to when Gnof was an adorable pup, the perfect companion to their little growing family.

Gnof arrived because their oldest son had developed a fear of dogs —  partially through the combined reaction of when the grandmother’s dog would lick their son’s face. Their son would squeal with laughter, yet one of the parents would scoop the baby boy up into their arms. Both parents knew gran-gran’s dog Spot was a poop-eater, and Spot did so regularly because Gran-gran did not walk him on a line. Gran-gran hardly corrected him, Spot was her baby.

The parents did not want dog cooties all over their son’s face.

With time their son grew afraid of Spot all the more because the dog would topple him over in his enthusiasm. For some reason, that dog really liked to lick their son’s face.

Their son liked animals, but not particularly much. After enduring Spot for a couple of years, their son wasn’t fond of petting dogs anymore.

Still, Gran-gran loved Spot and the parents loved their son.

The dad was very fond of dogs and had wanted one since he was a kid.

The family started their search for the perfect dog to fit in with them, one who wouldn’t eat other dog’s shit, one that could be trained and help their son conquer his fear, without knowing that he was helping. The parents discussed the future dog’s height, fur, disposition, and possible name.

How did Gnof find his unusual name? The name arrived in their lives before Gnof did.

It happened like this: when the children were young, the family would go to the zoo. Liking animals apparently runs in the family. The fact that the animals were being locked up in a fenced-off area did not stop them from going and enjoying the spaces.

[Nowadays people have figured out that a zoo is a less than desirable situation for the animals.]

But the children were young, the zoo was big and enjoyed a gorgeous outside playground. The sons (there were two of them) and the mother went often to walk around and check out their favourites. The dad had to work, so he didn’t accompany them every time.

The time Gnof got his name, the dad did tag along, and the little family was enjoying a gorgeous spring day.

Holland has great days when the sun shines, and this was such a wonderful spring time day. At the zoo, there is an area where people can walk up a wooden ramp, to admire the more dangerous animals from above, where it is more safe.

The zoo had created a savannah with proper bush and few trees to their left. The youngest was still in a stroller, and after looking at the sign naming the different animals, the mother walked to the edge to look out with both children.

The dad had stayed behind to read more about the background of the animals. The mother had noticed that someone had scraped one of the letters on the wooden sign but she paid no further attention. The dad, however, was deep in thought. At last he turned around and said to the mother, a few meters away, “Hey, did you know that there are Gnoffen here?”

The mother simply stared at him at first. Then she started to laugh, and then she couldn’t stop laughing.

In Dutch, a gnu is called a ‘gnoe’ which creates the same phonetic sound for this animal. In caps it’s spelled GNOE. Remember that someone had scratched the wooden sign? They had removed the white coloured lower part of the E turning it into F: GNOF. The dad pluralised gnus into Gnoffen. This tickled the mother’s whole being.

She knew the dad to be an intelligent man with highly specialised knowledge. Obviously, he had never learned about gnus in school or the university.

The dog name Gnof was famously born at that moment.

A Gnof is not just any dog, the word in Dutch feels like a very specific dog.

It was definitely a boy’s name, so that decided the gender.

Now to identify the type of dog.

The dad wanted a Great Dane, of course, whereas the mom wanted a butterfly-type of dog, small, fluffy, and cute. Neither suitable for the Gnof name.

They started by talking to friends and visited a Labrador kennel. The Labs were too much for the mother, tails swishing all over the place, and a mother certainly wasn’t going to be able to stop a dog from wagging his tail. No Labs.

Then one day, driving to the north of the province of Gelderland to go for a short hike with the boys, the family passed a parking lot where there emerged these adorable, medium-sized, fluffy dogs from a parked car. Not poodles, not Schnauzers, but something different. A reddish-brown color and similar to an Airedale, with whom the mom had grown up, but no black markings and a bit smaller. Immediately the family stopped and parked the car across the road, after agreeing simultaneously that this looked like a perfect size dog. And super-adorable.

They hopped out and walked over to the couple, who had about three dogs running around, sniffing the ground, each other, and doing their doggy business. The family was told these dogs were Irish terriers.

They fell in love with this breed.

Upon coming home, the mother started scouring the internet and asking friends if anyone knew of a good breeder who had these types of dogs.

They found a couple in Amersfoort who had a female, about to deliver a nest of pups. Six weeks later they were told to come by to visit. How exciting!

He would be part of the family.

The family met the parents of the puppy and, wow, the daddy was bigger than the ones they had seen along the road, and lighter in color. However, they didn’t need a show dog, they wanted a family dog. The oldest pup was designated as fitting the best with the family by the breeder: take it or leave it, Dutch style.

They took him. And when he was nine weeks old, they got to bring Gnof home.

Their Gnof, their constant companion, their happy greeter when they came home, their exercise buddy, their great friend.

And now, they were listening to his laboured breathing, his strange cough with an almost puking edge to it, occurring every 5 or ten minutes for short periods.

Gnof had been with a family member for over fourteen years.

They would miss him on so many levels.

They would not get to see him showing his teeth when he had missed them more than usual, his way of smiling.

Tomorrow he wouldn’t be here anymore. Who were they to decide that?

This is life, with a beginning and an end. At least they could make sure he wouldn’t suffer and have to live in constant pain. They were going to be with him until his very end, as much as it hurt.